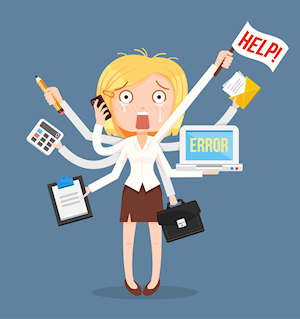 When it comes to Attention Deficit Hyperactivity Disorder (ADHD), it’s important to know that there are three different “subtypes” of ADHD and that, to be diagnosed with ADHD, you only need to fit into one of the three types.  People can have just the predominantly inattentive  type, the predominantly hyperactive/impulsive type, or the combined type.  However, the average person tends to think that a person is required to have hyperactivity symptoms in order to be diagnosed with ADHD.  For this reason, as Maria Yagoda describes in her article, ADHD is Different for Women, girls and women with ADHD, who often don’t exhibit hyperactivity, tend to go undiagnosed.  Her easy-to-read article is a lovely blend of personal anecdote and research-based information, with some other resources to check out, if you are interested. So, if you (or someone you care about) are of the female persuasion and tend to find yourself constantly overwhelmed by the day to day details in life that others seem to pull off without a hitch, I suggest that you give this article a read.

The National Alliance for Grieving Children has information available on their website to help kids to cope with the death of a special person in their life.  There are articles, books, and links to finding local support, such as Peter’s Place, as well specialty services such as camps for kids who have lost a parent.  Children need someone that they can talk to about death and loss.  A lot of times, parents and other close adults can meet these needs.  This resource can both  support the adults in children’s lives to feel comfortable with having these conversations, or guide you to finding others that can help as well. 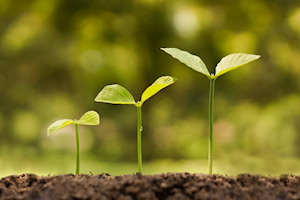 The TED Talk at the bottom of this post is another video of Dr. Dweck, this time addressing some of the do’s and don’ts for how to parent or teach (or, I would argue, live your life) in a way that fosters the growth mindset.  Here are the points that stand out to me:

The International Bullying Prevention Association provides resources, training, and information regarding the prevention of bullying, pulling from the latest in scientific research.  Periodically, they host webinars that are geared towards parents and educators, for free!  You can register to participate when it is happening live or, if you are a member (which costs $25 at the time of this post), you check out their webinar archives at your leisure.  Additionally, they host an annual conference to discuss the latest research and programs that are being used successfully.

TED Talk: The Power of Believing that You Can Improve by Carol Dweck, PhD (video) share

Think about the difference, emotionally, between these two statements:

For me and, studies show, for a lot of other people, the first sentence communicates a limitation. The second sentence is full of possibility. That’s not to say that everyone who says that they can’t ride a bicycle believes that they will never develop that ability. It just means that the second sentence clearly leaves the door wide open for growth to occur.

Psychologist, Carol Dweck, is a professor and researcher at Stanford University. She has spent a considerable amount of her professional life focused on trying to deepen our understanding of motivation. What makes people do what they do? In the TED talk below, she speaks about the results numerous studies, all lending significant support to the idea that, when students know that intelligence/skill is something that can be nurtured and improved upon, they are more likely to:

In one of her studies, a large number of students were divided into two groups. One group was told, simply, that they were smart kids. The other group was taught scientific facts about the brain and learning. It was explained to them that, “when they step out of their comfort zone to do hard things and they stuck to them, the neurons in their brains can form connections, stronger connections, and over time, they [the kids] could get smarter.”  The current term in the literature for this is “neuroplasticity.”  The study found that students who learned that trying things helps them become smarter showed greater motivation in school, better grades, and higher test scores.

Located in Radnor, PA, Peter’s Place offers free services to the families and loved ones who are grieving the difficult loss that comes from premature death.  Support groups facilitated by mental health professionals for children and caregivers and young adults are available. Services are also extended to local schools who have students who have recently experienced a loss. More recently, a new grief group has been added to meet the needs of people who are grappling with loss due to substance abuse.  When a loved one dies before old age, the people left behind can feel alone in their grief.  Peter’s Place is there to help.

From their website: Peter’s Place was founded in 2001 in memory of Peter Morsbach. After Peter’s sudden death at the age of ten, his family and friends became aware that there were few support options for grieving families, especially for those who could not afford it.

Friends of the Morsbach family created Peter’s Place, the first family grief support agency of its kind to serve our area. Originally designed after a nationally recognized program, Peter’s Place has since combined awareness of local community needs, professional experience, and extensive best practices research to produce a unique grieving center that is not replicated anywhere. 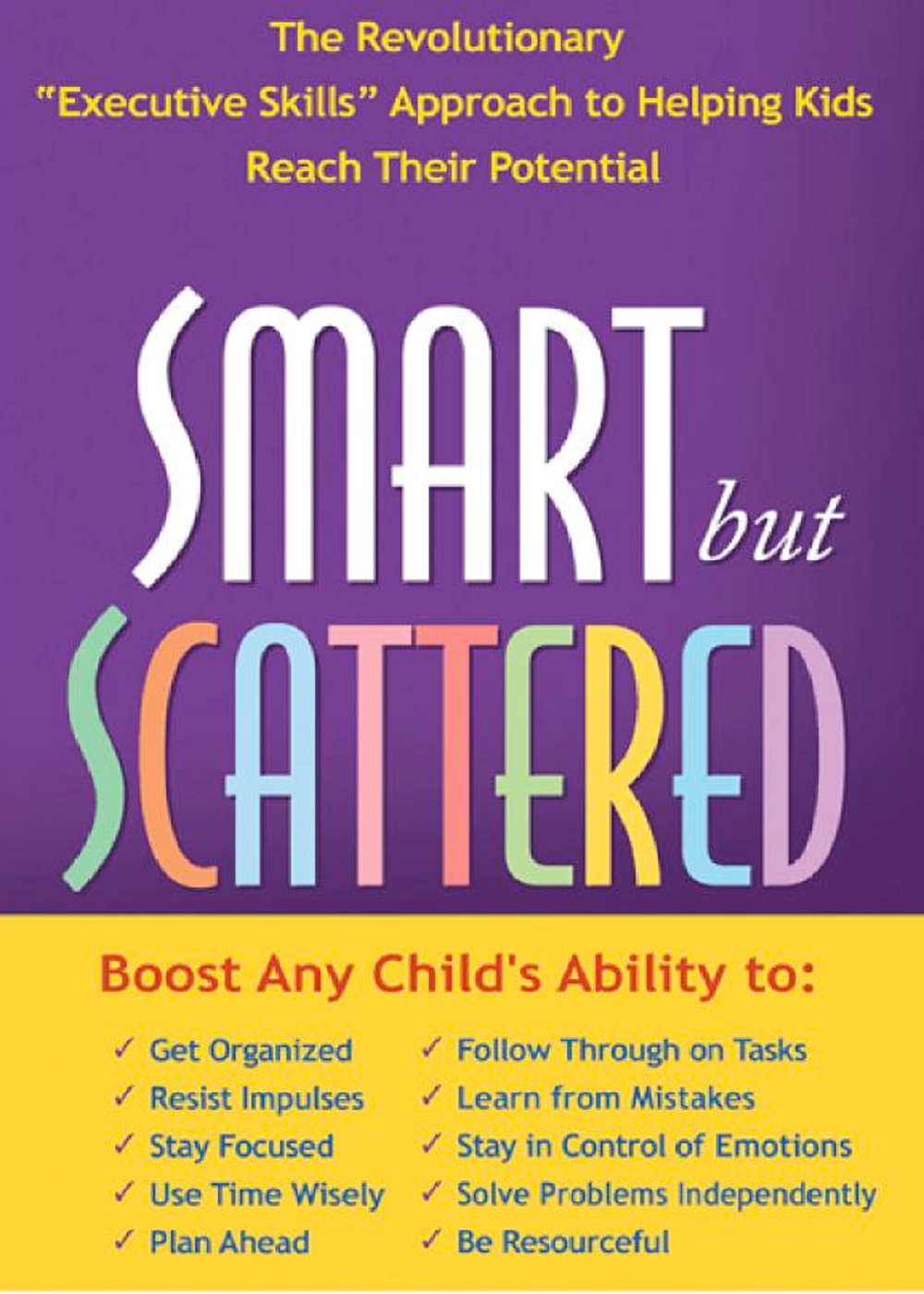 While I own this book, I have not had a chance to give it a read. It is geared towards parents of 4-13 year-old kids.  You can check out my review of their companion book, Smart but Scattered Teens, which I suspect is pretty similar to this one. Additionally, in creating this review, I was excited to learn that they now have a Work-Smart Academic Planner that I will be reviewing as soon as I get my hands on a copy!

* I don’t make any money from the books that I recommend.  My reviews are solely based on wanting to let people know what’s out there and could be helpful to them.

Written by a psychologist who has lots of experience working with kids with ADHD, this is an easy-to-read book that is broken down into short chapters giving a nice overview of ADHD and explaining things that are important for kids with these issues that doesn’t involve medication. Also, it’s not that Dr. Monastra is anti-medication, it’s just that his experience (and scientific research) has shown that there are additional/other interventions that can be helpful for kids (and adults!) with ADHD.  Basically, medication alone is not enough.  He talks about things like diagnosis, the role of medication and what it can and can’t do, how to work with the school to support your child’s success, developing emotional control, and giving yourself a break as a parent.

Excerpt from the publisher’s summary: “Kids with ADHD need to be loved and shown how to become successful adults. Unfortunately, their lack of attention and restlessness often get in the way. Parents of these kids try so hard to stay connected and remain patient in the face of daily frustration. However, it is an incredible challenge to remain positive and involved when your child does not respond to the kinds of strategies that work for other children.  Without guidance and systematic treatment, these bright, inquisitive children are unlikely to graduate from high school, are more prone to use illegal drugs, and struggle to maintain employment as adults.”

Note: I have the 2005 version. In writing this post I see that there is a 2014 version. So I don’t know what has changed between the two.

* I don’t make any money from the books that I recommend.  My reviews are solely based on wanting to let people know what’s out there and could be helpful to them.

(PLEASE READ my cautionary note at the end of the description in this post.)

This website is chock full of ideas and resources.  I like it because it provides information in quick, easy to digest chunks, perfect for the ADHD soul.  You can subscribe to enewsletters that will send out information on specific topics.  They also offer free webinars presented by people who work with individual with ADHD or have it themselves.

I find that this site is really a great way to begin to familiarize yourself with how the ADHD brain works and what approaches and strategies can be the most helpful in coping with some of the challenges the ADHD brain can present. It also does this in a way that celebrates the strengths of ADHD brain, which I really like.

CAUTIONARY NOTE: I admit that I have mixed feelings about this website.  I’m listing it because it does provide access to a lot of wonderful information.  However, the advertisements have a heavy push to encourage people to spend hundreds of dollars on “ADHD Coaches.”  I have no experience with anyone in that line of work.  I do know that there is no licensure for ADHD coaches so you would have to do your own investigation to make sure that, should you ever choose to try that option, you are working with someone who is skilled and worth the money.  I don’t find that it is necessary to have an ADHD coach to be able to work through some of the challenges that having ADHD can present, however I don’t rule out that they can be helpful in the right circumstances.  Self-education, trial & error, working with a licensed professional (which insurance will often pay for), these are all things that can promote growth and change without such a large expense as paying out of pocked for a coach.